CPW organizes a seminar on the coexistence of moose

We live in the mountains to be closer to nature, but this closeness to such beauty comes at a cost. There are layers of preparation and mitigation needed to claim full responsibility for yourself on the trail in the desert. Even still, the influx of people into the area increases the likelihood of a wildlife encounter, and there’s nothing like being over-prepared for such an encounter.

On Sunday, June 12, 2022, at the Wild Bear Nature Center (WBNC), Sam Peterson and Tyler Asnicar, District Wildlife Managers for Colorado Parks and Wildlife (CPW), presented a seminar on moose ecology and coexistence, hosted by the director of nature education at the WBNC Michel Witte. The meeting took place in person at the WBNC, at the Caribou Village mall at 20 Lakeview Drive Unit 107, and online via Zoom.

Asnicar has worked for CPW since 2017 and has also worked for the Bureau of Land Management and the National Park Service, and Peterson has served as District Wildlife Officer with CPW since 2019 and wrote his dissertation on the ecology of the moose. As district wildlife managers, Asnicar and Peterson specialize in enforcing animal safety laws, educating the public about animal biology and safety, and overseeing the natural progression of local wildlife as well. than their habitats. 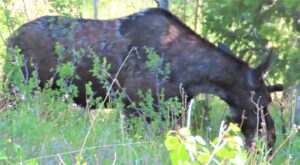 Moose on the loose On Saturday, June 11, 2022, at Pinecliffe, I took my dog, Ruby, outside. She stood at the corner of the house, her tail straight. I looked around the corner and sure enough a huge moose was slowly grazing under the house. The dog came straight into the house. PHOTO BY JOHN SCARFFE

The moose is the largest mammal in the deer family, closely related to elk and deer, and the Shiras moose is the type known from Colorado. An adult Shiras moose can weigh from 800 to 1200 pounds, reaching a maximum shoulder height of six and a half feet, with the bull moose having an antler spread of up to 55 inches. They were introduced to Colorado in 1978 primarily for hunting purposes, and due to fewer diseases and natural predators here, their population has increased dramatically over the past four decades.

Regarding coexistence with moose, Ansicar and Peterson provided advice on how to avoid and mitigate potential conflict. It has been suggested that homeowners who wish to prevent moose from causing damage to their property should install a six foot fence with a strong top bar and possibly electrify portions of the fence at a height of five feet. Also, keeping pruned tree branches higher than 10 feet off the ground will prevent moose from being able to graze.

Moose typically feed on willow, aspen, mountain mahogany, Douglas fir, and other aquatic plants; they feed for 11.3 hours and consume an average of 16,000 calories per day. However, the moose will eat grain and hay which will negatively affect its digestion by creating too much stomach acid and could be fatal. It is suggested that you keep grain and hay, and any other “attractants”, clear of your yard to further deter moose from the property.

Ansicar and Peterson strongly advised hikers and mountain bikers to stay aware of their surroundings at all times while on the trails. Moose can be found in flat areas among willow and lodgepole pine stands, in riparian or transitional areas, and are most active, as well as aggressive, during their mating season (rut), from September to October, and its calving season, from May. until June. During this time, outdoor enthusiasts are advised to wear or pepper spray and make occasional noise when approaching blind spots, such as singing or talking; bells are not suggested as they may cause more aggravation to the animal.

Because wolves are a natural predator of moose, it is suggested that you not just leash the dogs, but leave the dogs at home when you plan to hike, bike or jog in the wilderness. nature during moose rut or calving season.

Threat indicators to look for are when the moose’s ears stick up, their hackles stick up, their eyes bulge and roll, or if there is a moose calf present. If you approach within 25 meters of a moose, it is advisable to back away quickly while remaining aware of the animal’s position, as the moose, although not very agile, can charge very quickly. Seek shelter immediately behind a tree, rock or car and, in case of attack, stay in the fetal position while protecting your head and neck; a moose will attack by stomping with its front hooves and usually stomping several times before leaving.

Members of the public have asked about the effectiveness of breaking eye contact with the moose or trying to “look big” and make noise to scare a moose. Ansicar and Peterson noted that making loud noises can help alert others nearby to the situation, but will not properly prevent a moose from leaving. The public has been taught not to attempt to scramble a moose as they tend to stubbornly stand their ground and become more restless; and if using a compressed air horn, as a precaution, first be well informed of the surroundings and nearby traffic before discharging the horn. It is strongly advised to stay within 100 meters of the moose at all times.

Ansicar and Peterson presented a timeline of events regarding a moose attacking two hikers and their dogs in West Magnolia on Tuesday, June 9, 2022. The incident was discussed and speculated on the Dutch Facebook group Nedheads, and the timeline provided by CPW helped to indicate what may have agitated the female moose and what steps were taken to avoid having to put the animal down, although it inevitably had to be euthanized.

At 7:59 a.m. on June 9, CPW received a 911 call about the initial moose attack. A Boulder County Sheriff’s Office (BCSO) deputy responded at 8:07 a.m. and deployed a less-lethal shotgun (bean bags) when they heard the victims of the initial attack scream for help. . At 8:10 a.m., the BCSO deputy fired four shots in an attempt to force the cow moose out of the area; at this point the moose descended to Haul Road and Observatory Spur Road/Reroot Trail where it rammed a jogger and charged a mountain biker, who had previously observed the calf alone before being charged and deploying bear spray on the female moose.

At 8:17 a.m., emergency first responders arrived and began tending to the first victims who were sheltering in a nearby tree. At 8:21 a.m., the BCSO deputy fired a warning shot 30 yards from the female moose; at 8:29 a.m. the moose returned and charged EMS as they attempted to load the victim onto a stretcher and into an ambulance. It was at this point that the BCSO deputy had no choice but to fatally shoot the female moose.

CPW was already involved in moving a moose out of a neighborhood in suburban Thornton when they heard of the attack. CPW arrived on the scene at 9:45 a.m. and by 10:30 a.m. had loaded the carcass of the bull moose into a vehicle for transport to CPW Wildlife Health Lab in Fort Collins.

From 10:30 a.m. to 12:30 p.m., CPW and Boulder County Animal Control continued to search the area for the orphaned calf. The calf was found and brought to the Foothill Wildlife Research Facility where it will be humanely studied for research purposes. Ansicar and Peterson noted that caring for the three-day-old calf is a rare case for CPW, and usually in these situations the calf would also have been euthanized.

The female moose eventually protected her calves and over time became increasingly “abnormally” restless. Because hazing attempts had unfortunately failed and the female moose continued to threaten human life, lethality was used as a last resort. Ansicar and Peterson were sure to mention that the West Magnolia incident was not a typical case and moose euthanasia is not standard procedure.

Ansicar and Peterson answered some questions from the public regarding the West Magnolia incident, specifically about other non-lethal tactics that may have been deployed. CPW uses tranquilizers when they need to move an animal from a heavily populated area, but tranquilizer will take at least 5 minutes to start affecting an adult moose, with the best-case scenario for complete immobilization being longer than 15 minutes. . Tasers are not promoted as a viable option in such scenarios because they fire two individual probes that must precisely hit multiple muscle groups to be effective; typically, a moose will charge immediately once tanned.

CPW will take steps to prevent any future incidents such as the attack that occurred on June 9 by posting more signage in West Magnolia and adding additional patrols during calving season. During this time, residents of the Netherlands are advised to responsibly breed and keep dogs confined to properly enclosed yards and spaces, or consider leaving them entirely at home during the rutting and rutting seasons. of calving.

Please contact CPW if you witness any problems or aggressive behavior from local wildlife. CPW can be reached at 303-291-7227 Monday through Friday from 8 a.m. to 5 p.m. For other emergency needs, you can contact the Colorado State Patrol at 303-239-4501 any time of the day or week. To anonymously report illegal wildlife activity, call Operation Game Thief at 1-877-COLO-OGT.

CPW, along with Wild Bear Nature Center, will be hosting another seminar on our local black bear population and how to safely co-exist with our bears on Wednesday, June 29, 2022 at 6:30 p.m. at the Nature Center’s Eco-Arts Lounge as well as on Zoom. Sign up through the Wild Bear website at www.wildbear.org/events/.